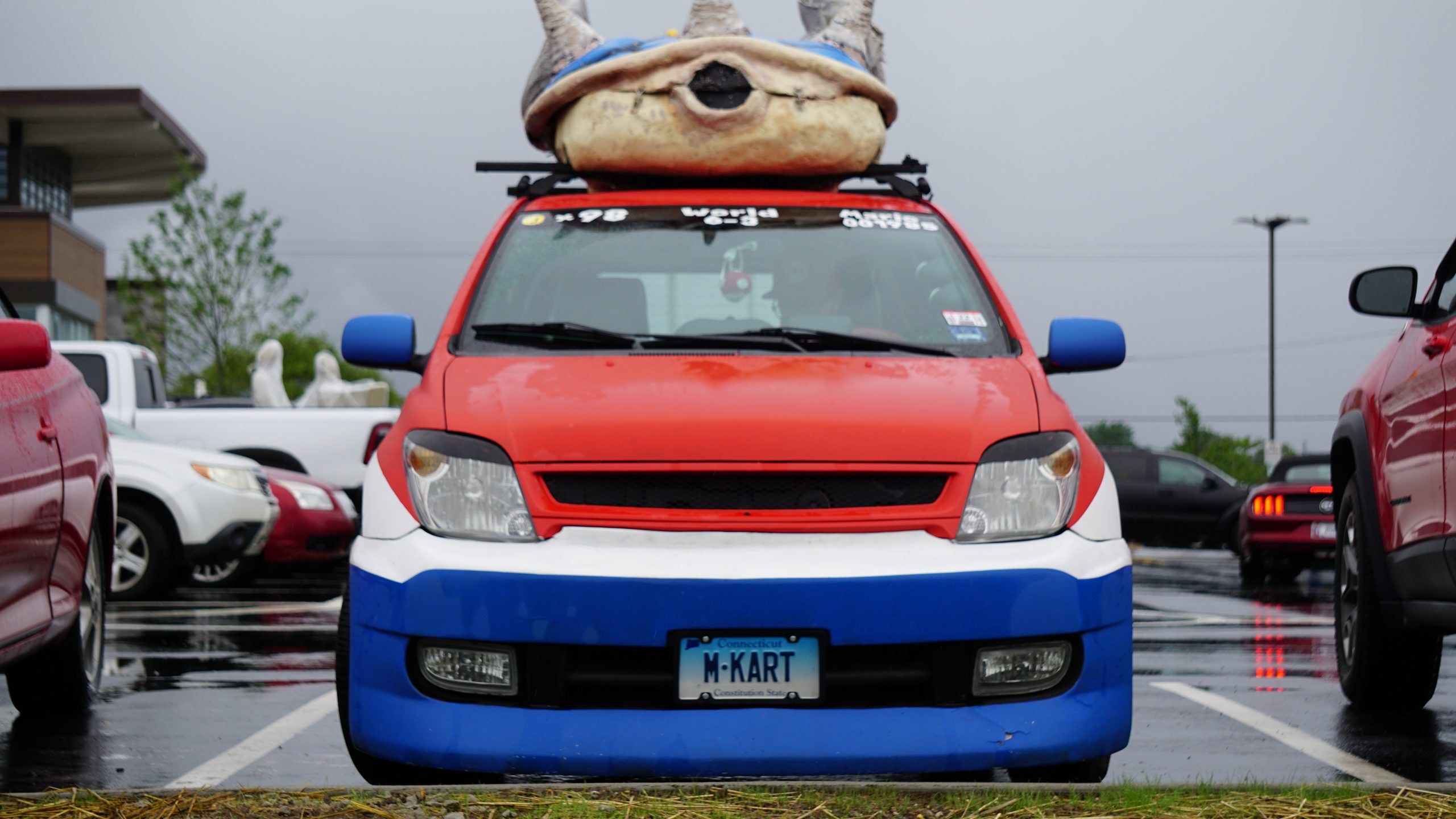 This is the story of my custom Mario Kart car or the M Kart. It is a 2005 Scion (a Toyota brand) and I love customizing it, and bringing it to car shows and game conventions. I am currently driving the MKIII version of the M Kart car.

MKI of the MKart was a Scion xA flint mica color, and it was standard. I couldn’t even drive it home, but I knew I wanted a standard car. My obsession with car customizing steamed from watching the first Fast and Furious movies, and probably some of “MTv’s Pimp my Ride”

Video games have always been a love of mine, so I wanted to combine the two together. I always enjoyed Nintendo more, so I decided to go with Mario as the theme of the car. I started quick work on the inside of the car

The car would continue to change as time went on and my skills as a fabricator improved. I was able to do more and more, making it something really unique. I had to add something to the outside of the car to help tie the Mario themed together

I took it to many car shows and came home with a few trophies as well, and the car stayed like this for a few years. The time had come to really step up my game and ReMake the car into V2.0 I got a new body kit for the car and it needed a paint job. I ended up getting some tintable chalkboard paint and color matched it to the original NES System

Only thing left was to add a new Decal down the side. I enlisted local artist Tom Ryan to come up with a unique design. We decided to do Mario and Luigi this time, showcasing both brothers on the car in Fire & Ice form.

I loved the contrast this version gave with the lighter color scheme and the way the vinyl graphics really popped off of the car. The car stayed this for about a year, until March of 2018. I left my friends studio to head to Toys R Us a few towns over and hit a patch of ice, sending me spinning into a barricade. The MKart was totaled.

pieces of the car laid in the street near the wreck

Luckily the snow had braced my impact against the rail, and I walked away unharmed, but the car was unfixable.

The community rallied together and my friend David Apuzzo set up a GoFund me page to help raise some money. While I had insurance on the car, they would not pay for extra things on the car, so all my custom work had to be a lost.

Thankfully enough with the check from insurance and the community I was able to purchase a 2005 scion xA to start my project once again.

It didn’t stay stock for long. I was able to salvage the bumpers from the wreck and fix them.

The car was looking pretty good for now, but my new vision had a three tone paint job in mind.

I again went to the chalkboard style of paint, since its cheap and easy to work with. Mario’s Kart in the new game is Red, White and Blue with yellow wheels, so we decided to mimic that on this new project.

All we needed was a new graphic. I again reached out to Tom Ryan since he did such a great job on the last one. I told him I wanted something mimicking a race car or slot car. We choose to use a big number on the side. 85, the year Nintendo was released, and also the year Marty McFly went back in time (my favorite movie) and thus Mario Kart V3.0 was born

I was back. I had a new car and something unique to show to the world once again.

The car is a ongoing project and I had a lot to rebuild, but thats it. I was given the opportunity to do so. The community so what I could do, and lent a helping hand when I needed it the most. Sure I lost my first brand-new car I ever bought, and thousands of man hours put into it. But I hadn’t lost the experience and journey that car lead me on. How many projects I failed on the car, to try again and learn how to do it better. How many shows I brought the car to and seen peoples kids react to it.

I continue you on with Scion MKart V3.0 and love to keep on making it my own.

I continue to meet new friends with the car and love to hear their reactions and stories about Mario Kart.

So keep an eye on the road, because you might check that review mirror and see me coming up behind you with my Blue Shell ready to go !